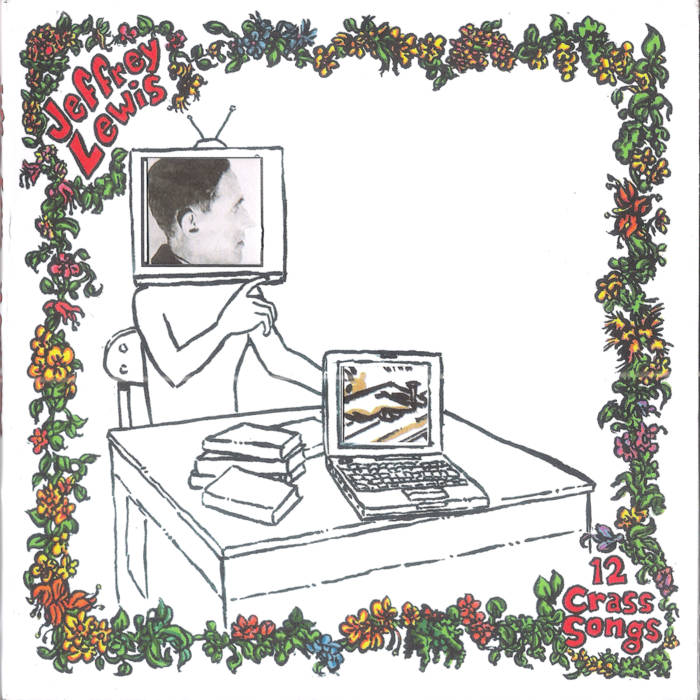 The Father of Modern Economics

(NOTE: THERE ARE TWO UNRELEASED BONUS TRACKS that come with the full album download! Acoustic demos of two Crass songs "Dry Weather" and "Bata Motel" recorded by Jeffrey Lewis around 2006 as candidates for possible inclusion on what became the 12 Crass Songs album.)

All songs are Jeffrey's reinterpretations of songs originally written 1978-1984 by the British anarchist punk band Crass. This "12 Crass Songs" album was recorded mostly at Major Matt Mason's Olive Juice home-studio in NYC, and originally released on CD and LP by Rough Trade Records on Oct 1, 2007 in UK/Europe and Jan 29, 2008 in the USA.

"The record presents Crass’s lyrics calmly, often demonstrating how sane and practical they are; it proves once again, and kind of thrillingly this time, that no music is immune to interpretation" - The New York Times

"Jeffrey Lewis retunes [Crass'] vituperative, cats-and-gravel-in-a-blender sound into something approaching sunny-side-up genius... [and] Crass' lyrical, ultrapolitical vitriol is, if anything, more relevant than ever. It's the most astonishing cover album of the last 10 years, bar none." (4 of 5 stars) - Austin Chronicle

"Jeffrey Lewis’ talents appear without end… (on 12 Crass Songs he) magically makes the anarcho-rockers’ anti-establishment savagery his own, by wrapping their barbed sentiments in his trademark mottled tea-towel warmth” - NME

"He’s taken hold of any number of my old stormy favorites and breathed fresh life and fire into them. . . Man, I’m in awe of Jeffrey right now. Who’d have thought he could have done that?" - Everett True/ Village Voice

“What could be sacrilege is actually a small epiphany: the gorgeous instrumentation…proves a deft counterpoint to the lyrical rage. The Man probably said it would never work but The Man was wrong” - (4 of 5 stars) UNCUT

“It's no mean feat to transform such abrasive harangues into lush, tuneful folk… without defusing their righteous anger… but Crass's intelligent and indignant screeds could not hope for a more sympathetic translator.” (4 of 5 stars) - THE GUARDIAN

“His sung and songwritten folk stunts function on more than one level: as neurotic story-telling, hearfelt rap, and footstomping song craftsmanship… his latest album seems to be Mr. Lewis at his most accessible.” (8 stars) LOWDOWN Magazine

“Lewis has a gift for making classics out of classics, and throughout this smart, inspired album, there’s rarely a wrong note hit.” – Stylus

“It shows that [Lewis] can turn his hand to almost anything, and if anyone wanted to know how to re-adapt someone else's work in order to make it entirely your own, they should listen to this record… Connoisseurs may be aghast, but it's testament to Lewis' talents that, amid punk's sweat and turmoil, he finds so much bruised beauty.” – (9 of 10 stars) – INFOSHOP

“Does it really work, does it really achieve its purpose? Am I enjoying this as a Jeffrey Lewis record? Well, sure I am. His style is stamped all over it. But has the message sat well, has my mind been opened, if only a little? Will I get myself some Crass records? Of course I f**king will.” (4 of 5 stars) – Rock Feedback

“What I saw of [Lewis] live ranked alongside the highlights of the [End of the Road Festival] weekend, and on record the same combination of dry wit and incredible musicianship is evident - even when turning his hand to songs originally recorded by seminal 1980s anarcho-punk band Crass. Lewis makes them his own, and rarely has a covers album been pulled off with such aplomb.” – Thurrock Gazette