by Jeffrey Lewis & The Junkyard 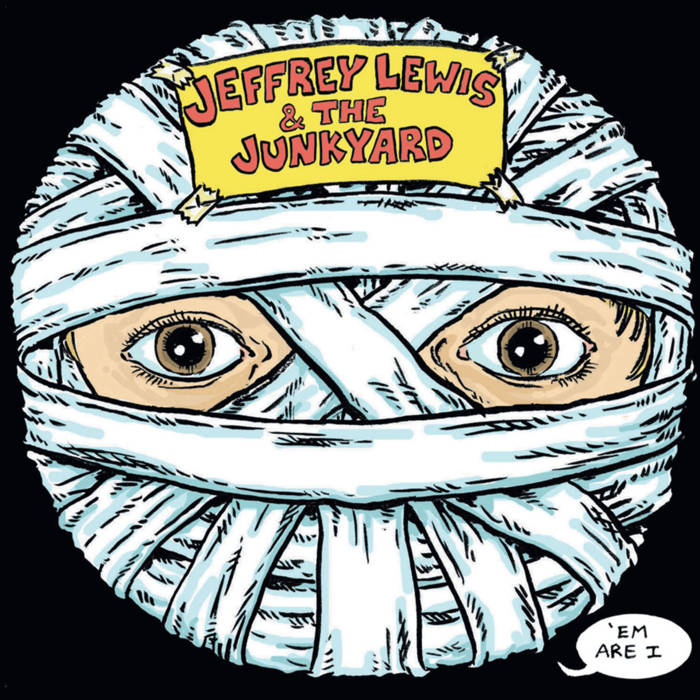 Jeffrey Lewis's music always makes me feel calm and wise inside (the songs that make sense) & how lovely it is to listen to these commentary tracks! Favorite track: Roll Bus Roll.

NOTE: THERE ARE 11 BONUS TRACKS of "DIRECTOR'S COMMENTARY" only available with the FULL ALBUM DOWNLOAD! This is producers Jeffrey Lewis and Mark Ospovat discussing each song, on top of the corresponding instrumental tracks, commentary recorded in 2009.

JEFFREY LEWIS & THE JUNKYARD: 'EM ARE I
11 song album, first released by Rough Trade Records in May of 2009. Produced by Jeffrey Lewis with engineer Mark Ospovat. All songs are Jeffrey's except "The Upside-Down Cross" which is a Jack Lewis song.

PRESS for 'EM ARE I:

"On this one, there are wonky backup vocals, trashy-sounding drums, disgustingly distorted guitar solos, vaguely off-key horns. You get the sense that Lewis, also a talented comic-book maker, does whatever the hell he wants, and it totally works." - Now Magazine

"All of these are very good tunes, but it's the heartfelt content at the album's thematic core that makes 'Em Are I not just Lewis' most consistent album, but also his most truly affecting and easily his most successful outing to date." - All Music Guide

"The uptempo tracks are invigorating with their harder guitars and drums, and Lewis' humor abounds, but his slower, softer, acoustic songs are the standouts" - Billboard

"Like any great storyteller, Lewis is intent on focusing on the bigger picture, on giving both sides of the story... If perhaps before Lewis’s music had a tendency to be swamped by small-print, here the songs know when to step back, to give way to a catchy chorus or a hummable riff... 8 stars" - Drowned in Sound

"Bands as magical and genuinely original as this are as essential as oxygen." - Culture Delux

''Em Are I is is a record that works on every level... simply a little gem of an album that continues to offer new delights upon repeated listens." - E Entertainment

"...2009 should continue to see young Mr Lewis sweeping up old and new hearts alike across the world's underground." - (4 stars of 5) Bearded Magazine

'''Em Are I is probably one of the best records so far of Lewis's lengthy career. It marks real progression, even after over ten years of releases. That it is a successful balancing of the tragic and the triumphant is testament to his skill both as a wordsmith and a musician." -Click Music

"One of America's funniest, most sincere songwriters" - (4 stars of 5) The Guardian

"A gem from a songwriter hitting his stride. ...Easily his best work yet" - (4 stars of 5) Guitarist Magazine

"This is one of the albums of the year from one of the best lyricists in the world today." - Geek Pie

I love ‘Slogans’. It isn’t Jeffrey Lewis’ best song, but it’s the first song on what is by far his best album. An album I’ve come to absolutely adore. Just hearing the opening slightly distorted acoustic guitar strums gets me really very excited. Again, it’s not because I really love the song. The song’s OK. But what comes after it is astonishing. And I listen to albums from beginning to end. Hearing ‘Slogans’ reminds me I’m about to have a really brilliant time. Whilst every Jeffrey Lewis album prior to this has been admittedly charming, there have been one or two standout moments amidst the lo fi scratchiness that have suggested that Lewis was capable of something quite special. These moments, songs like ‘Back When I Was Four’ and ‘Williamsburg Will Oldham Horror’, great though they were, actually served to make the rest of their parent albums seem a little bit... worse. Or just disappointingly un-ambitious, at least. What ‘Em Are I does so well (‘Slogans’ aside) is have ten of these moments, the quality not dipping at all, once it gets going. Prepare for ‘Roll Bus Roll’ (the best song about sleeping, ever), ‘Broken Broken Broken Heart’, ‘If Life Exists?’, ‘Whistle Past The Graveyard’ and the rest of it to rocket to the top of your list of favourite Jeffrey Lewis songs. It’s also going to be the best source of witty lyricisms you’ll have stumbled across since Morrissey stopped being at all funny or insightful. ‘If Life Exists’ is absolutely full of them – “it’s all easier said than done and it’s not even easy to say” being a favourite, ‘Broken Broken Broken Heart’ bettering it with its expert summation of what it feels like to be a completely useless male wondering about the strength of his own love for another – “Can I tell it that I don’t care if it live or dies, can I hate it and just wait and see? Can I send it to the arms of another man less cruel and curious than me?”. Elsewhere, ‘Whistle Past The Graveyard’ amuses with its musings on brain eating Zombies and the nature of mortality (““if I was in hell I would be happy knowing other people were in heaven, it would make hell not so hellish...”), ‘The Upside Down Cross’ is a collaboration with brother Jack in which a bickering couple head to Florida to save the manatee, and I don’t know what ‘To Be Objectified’ is about, but the fact that it gains a different meaning every time I listen to it is testament to its greatness. “It’s hard to get too bored if you pick the right two chords”. When said chords form the backing of some of the most simplistically beautiful melodiousness and thought provoking wordplay of recent years, it’s hard to be anything other than enthralled. - Thomas Hannan, Rock Feedback