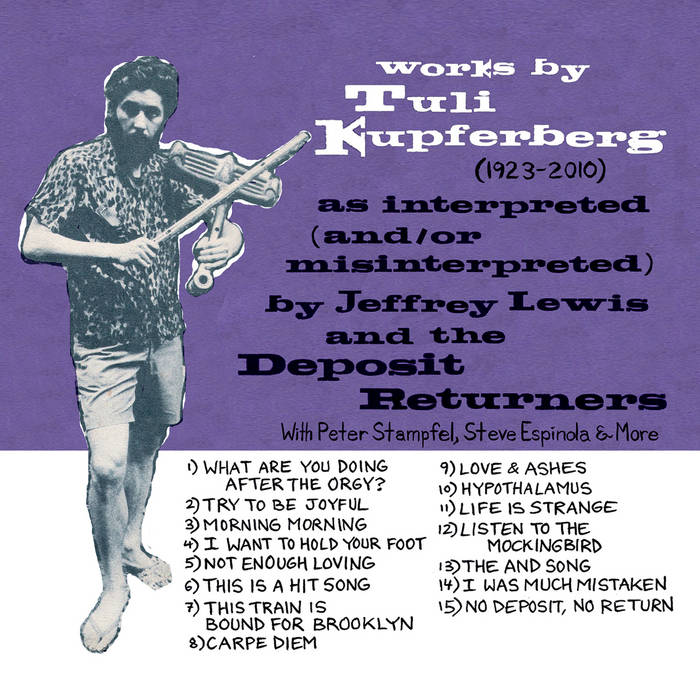 thelma blitz I love this album because I love Tuli and the Deposit Returners did an awesome job of keeping him alive.

Underground legend Tuli Kupferberg (1923-2010) was always the oldest man in rock and roll, co-founding the Fugs in the winter of 1964-1965 when he was already in his early 40s.  Being twice the age of Dylan, Reed, Jagger, et. al, never stopped Tuli from consistently being more outrageous.  Latter-day bohemian torch-bearer Jeffrey Lewis befriended Tuli in the early 2000s, and has personally organized “Tuli-day” memorial tribute concerts every year since Tuli’s passing.  This album documents some of the finer fruits of Jeffrey’s tribute arrangements, drawing from a four-decade range of Tuli’s various creative voices, from poignant 60s classics (“Morning Morning”) to never-recorded lyrics (“Listen to the Mockingbird”), poems set to music (“The And Song”), works that Tuli called parasongs (“I Wanna Hold Your Foot”) and later-period Fugs gems (“Try to Be Joyful”).  Across the board Jeffrey Lewis directs a co-ed band of wild and wooly cohorts, including original Fugs member Peter Stampfel, to bring the same surprising interpretive life to these covers as he brought to his critically-acclaimed “12 Crass Songs” album.  Whether or not you’re a Fugs fan or a Jeffrey Lewis fan, “Works by Tuli Kupferberg” is a rollicking, laughing, tear-jerking, psychedelic ride through a hidden history of New York City folk-punk sub-genius.  Recorded in the free-wheeling spirit of the original 1965 Fugs recordings, this is an album fifty years in the making.

Native New Yorker Jeffrey Lewis is a comic book writer/artist and a musician.  Jeffrey Lewis and his band tour the world, mixing folk with noise and sharing stages with the likes of Stephen Malkmus, The Mountain Goats, and more. Jeffrey has had albums on Rough Trade since 2001, his comic Fuff has been running since 2004, and he's been featured by NPR, The History Channel, The NY Times and more. ... more

Featuring Oakland sounds from the Smart Bomb collective and Samplelov.